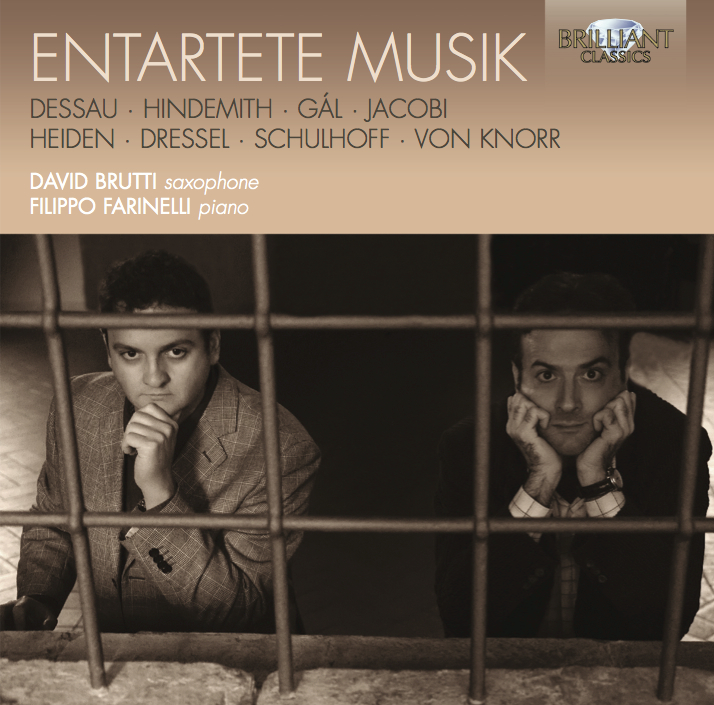 About this release: Entartete Musik (‘degenerate music’) was the term applied to music in Germany after 1933 (when Hitler became Chancellor) that did not fulfil the expectations of culture according to Joseph Goebbels and the Nazi party. The most ‘Entartete’ instrument of all was the saxophone, with its strong link to jazz and Afro-American culture, and various composers – many of them Jewish – who were not in line with anti-Semitic and Arian ideas found themselves in an impossible position with regard to art and life alike. Some, such as Bernard Heiden, managed to escape; some, such as Ernst-Lothar von Knorr, used their connections to survive in Nazi society. Among the less fortunate was Erwin Shulhoff, who died in a concentration camp in 1942. Pieces from all of these composers and more are included on this disc.

Spoiler title
This compilation, then, brings together the works of a variety of composers who shared the same struggle to express themselves under a regime determined to stifle their work. From the playful and parodic work of Paul Dessau to Shulhoff’s bold and biting Hot-Sonate, Entartete Musik is a new look at European history during some of its most difficult years. The works are performed by the internationally acclaimed Duo Disecheis, regulars at festivals and concert halls the world over, and are a welcome follow-up to their recording of another 20th-century composer for Brilliant Classics: Koechlin (Complete Music for Saxophone, BC 9266). Other information: – Recorded in Italy in 2013. – This release brings together the complete works for saxophone and piano by composers who were judged by the Nazi regime in the 30ties as “entartet” (degenerated). Their common stylistics (as if there are such “qualities” as to be called degenerated..) include a tendency to modernism and escape from traditional (preferably teutonic) musical language, an openness for other musical forms and styles, such as jazz and Afro-American influences, and last-but-not-least a Jewish origin. The saxophone was the Nazi’s worst enemy, harboring all degenerated qualities in one. – The composers included are Erwin Schulhoff (his famous “Hot Sonata”, the most frequently performed saxophone sonata of the 20th century), Hindemith, Dessau, Dressel, Jacoby, Gál and the notorious Herr von Knorr. – A fascinating panorama of an era of buoyant creativity, brutally suppressed by a totalitarian regime. – Vibrant and intense performances by two excellent musicians, David Brutti and Filippo Farinelli. – Booklet features detailed booklet notes and a biography.

You can be the first one to leave a comment.