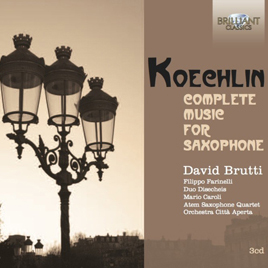 Charles Koechlin, music theorist as well as composer, was a significant figure in the vibrant early 20th century whirl of Parisian culture. After studying under as Jules Massenet and Gabriel Fauré, the latter being an enormous influence on his music, Koechlin co-founded the Société musicale indépendante in 1909 and many years later became president of the Féderation Musicale Populaire. Starstruck by Hollywood, Koechlin often found inspiration in its legendary figures and dedicated many pieces to actresses such as Greta Garbo, Jean Harlow and Lilian Harvey.Koechlin’s compositional style contains elements of impressionism, and his developing interest in the saxophone can be closely linked to his enthusiasm for 1930s cinema.

MORE
Twenty years later, the publication of his Traité de l’orchestration, in which he praised the saxophone for its sonority and agility, coincided with that of a set of 15 studies for the instrument. These studies, of varying length and character, feature in this collection, alongside works such as the Deux Sonatinas, Septuor pour instruments à Vent, and the celebrated Epitaphe pour Jean Harlow.Formed in 2001 by David Brutti and Filippo Farinelli, the Duo Disecheis explores 20th-century and contemporary chamber music. Having performed at many prestigious festivals and venues throughout Europe, the duo has achieved enormous success in international competitions and has collaborated with composers such as Paolo Baioni, Stefano Trevisi and Dimitri Nicolau. Joining the duo on this recording is the Atem Saxophone Quartet, which has received critical acclaim for its performances at numerous chamber music and jazz festivals.

Other information:
– For the first time complete on CD: Charles Koechlin’s Music for Saxophone, an important issue of this musical genius.
– Contains notes on the composer and works